I’ve been feeling a little uncertain the past few months… okay, a lot uncertain. When I finally understood that I was stuck, I became a bit surprised…in a panicky sort of way. How could I be stuck? After all, I’m a Creativity/Life Coach and an intuitive one at that. I’m not supposed to be stuck. I’m supposed to be immune to stuckness. I have many, many tools at my fingertips to unstick all sorts of stuff. In fact, I help OTHER people get unstuck which means I’m a Master at Self-UnStuckness! Right!?!

And now for a little background info (hindsight-induced): Apparently, when I get stuck, I get so wrapped up in it I forget I’m stuck and think that everything is a mess. Everything! Then I do some wholehearted wallowing and a sense of immobility overcomes me which soon starts to feel kinda comfy, like I’m floating in a vat of mac & cheese. So, I end up hanging out in the vat for awhile (can you say “unconscious habit”?) and will stay nestled there not doing anything until I start to gain too much weight.

For example, this time I put on about five pounds of “nothing is working” plus eight pounds of “I have no more ideas” and a whopping ten pounds of “I don’t know what to do anymore.”

Anyway I figured I needed to lose weight… and FAST!

But, of course, it didn’t occur to me at the time that I was simply stuck and could do with a closer look at my thought processes because… well… as I mentioned… “I don’t get stuck” (something to do with a slight perfectionist tendency maybe?). And since I didn’t realize i was stuck, I didn’t remember that this state is not permanent but more of a flow and can actually be helpful (more on this point in future posts).

So, as it happened, I got busy and changed the entire focus of my business…again.

Yup… ‘cause I thought that would solve the problem I thought I had.

Right, I didn’t have an actual problem. I just had a moment (or three) of uncertainty.

The Good News: I did SOMETHING and creativity flowed.
The Bad News: I wound up even more stuck than ever because although I was reinventing stuff, it was off target.

What’s a mere human to do?

Along with Stuckness came the land of Non-Meditation (big surprise, eh?). So one morning this mere human took three deep breaths and asked her Inner Being (aka, Higher Power, Universe, God, Source, Mistress of Chocolate-Covered-Raisins) what the heck to do next. Up came the notion “Well, you COULD get out of resistance for just a moment, you know.”

So I got busy with some in-depth personal discovery actions, found my way back into creative action, and landed back at Rarely Balanced where people are recognized as creative, intuitive, talented, and uniquely quirky – the surefire formula for a successful, fun-filled life.

For those of you interested in what I did to unstick myself this time, my steps are listed below. Your process may look different – tell me about it, if you like.

– hired a coach (I self-coach myself daily, but another perspective is invaluable when an issue gets too sticky)
– focused directly on releasing resistance and any lingering “supposed to’s”
– reestablished my meditation practice
– focused on what I find enjoyable 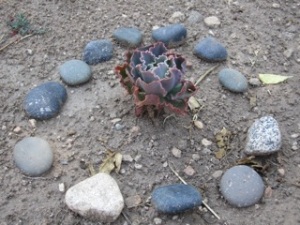 – started writing down all my crazy ideas in one book (a Scanner tool from “Refuse to Choose” by Barbara Sher). It’s oddly liberating.
– decided to learn a new instrument (it’s a surprise)
– reintroduced, in small bites, some easy creative things I love to do: (practiced piano, doodled, hung a picture, reorganized a few things, did some creative writing, planted a cactus